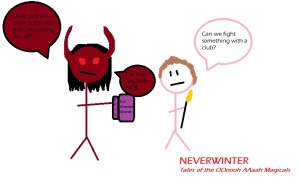 DISCLAIMER: I am a Tiefling Scourge Warlock who once raided Dragon Coast with a band of hooligans and misfits. It is with your own discretion that you choose to believe anything I say from here onwards.

Neverwinter is a free-to-play Dungeons & Dragons MMO that was first released on PC in June 2013. It came to Xbox March 31st this year. I’ve been playing it from the minute it glowed READY TO START, and my eyes hurt. Send help. Please. They’re all bloodshot and everything.

Even though I’m now playing as a scourge warlock I originally created a half-elf devoted cleric, and let me tell you, the character creation is a lot of fun. Your character is fully customisable and you get to choose a religion, area of origin and back story. You also get to write a more personalised back story on your character sheet. I’m pretty good at heart wrenching stories so I got quite in depth with mine and wrote “Grr. Roar. Evil Warlock.”

Admittedly, this game is damn addicting. It’s one of those “just one more quest” kind of games where before you know it you’ve already levelled multiple times and suddenly you’re in an inn with a dwarf who is stripping on a table and a dragon that is shouting about all the ladies that want him (more on this later).

I’m level 19 and so far have only played solo. It’s easy enough to complete the story and quests alone (I have only died once and that was by walking off the edge of the city’s floating island, just to see if I could – you can), and is made even easier when you acquire a companion. I believe you can do this from the start or at least I was prompted to. Unfortunately the website was having a hissy fit so I decided to brave the tides alone. At around level 16 you are given another companion, and this time you get to choose. I decided on a healer, which I thought was a really smart move… the only downfall is that he’s an annoying little brat who keeps asking me to go fight something with a club, even when we’re fighting something with a club.

Although I’m playing solo it is rare that I feel alone in the world. There are people everywhere. It was pretty amazing when I first entered the main city to find masses of folk. Even in the more populated areas like this I’ve had no trouble with latency or connection and my internet is not the best.

The city is large and it’s a little confusing trying to grasp all that you can do, even though it’s your typical MMO kind of stuff. The developers must have realized this because you’re sent on mini quests around the city as you level which makes it easier to find out who sells what. That being said, one thing that still continues to throw me off is all the different types of currency that can be used. I still have no idea how it works and I feel like Oliver Twist walking around with my 2g 49s 10c trying to find any vender that actually wants it.

Speaking of money, I think it is with Zen that the devs earn theirs. Zen is an in game currency that is bought with real money, although from what I’ve seen you can also trade Astral Diamonds for Zen. I haven’t seen anything that you need to buy to progress and from what I’ve read it’s generally cosmetic items that you may want to purchase, rather than need to. It’s a little off-putting, and I don’t like being brought out of the game to think about real world stuff. I wish there was a way to make a one off payment which gives you access to everything in the game, but it’s no big deal. And, just to make it absolutely clear, I’m in no way against the micro-transactions (folk gotta earn some dollar) I’d just prefer not to live in between worlds and I’d like to remain completely absorbed in Neverwinter when playing.

Also, for all those people asking how you dance –> LB and down for the chat screen –> Y for emote menu

Thank goodness the controls are so easy (see what I did there? No? Yeah, it didn’t work). Honestly, I was interested to try the controls and they’re great. The devs have really made use of the controller and it’s impressive how many items/spells you have bound to the buttons. As you level you will start making choices to switch between which spells to bind, but then as you level higher you unlock more bindings.

I’m pretty lost when it comes to how I should spec my warlock. So far I’ve been putting points in Temptation with a couple in Damnation. But, honestly, I’m useless with this kind of stuff. When I played World of Warcraft I had my Rogue dressed in leather with intellect because I thought it would help to make her smart… looks like I’m going to go down the same path with my Warlock!

One thing that I hope to try out soon is an instance. I’m silly though and get pretty nervous when playing with strangers. Uh…I mean…

I’ve led a hard life as a tiefling pirate. It doesn’t matter where I wash up I’m bound to be judged. It’s like they can see my past in my eyes. But maybe that’s just the paranoia that I can’t shake from my bones. It remains like the chill from an icy wind and pounds in my heart like the first time I lifted a purse from a noble’s belt. Ha. Look at the nobles now. Begging and crawling about in the grimy streets and alleys of this place. Now they are the ones with no purpose and I am the one making an honest diamond; although, perhaps that is something they never did anyway. But when their eyes find mine my heart beats so furiously I can hear it above every voice in the city. When I look away from them, and it is always I who looks to the ground first, I dwell on the paranoia and wonder if it is instead guilt. Then again, I didn’t feel guilt when I took from them then, and I won’t when I take from them now. Perhaps that is why the chill remains. I’ve left the Dragon Coast, but the cold waters are the waves that push the blood through my veins. Once a tiefling, always a thiefling! <– That’s a long way of saying oh no, oh no, did I just hit need instead of greed? Will this go on my criminal record?

Anyway, I could go on for a long time about this game because even though I’ve only been playing for a couple of days I’ve seen a lot (some things I wish I hadn’t) and there is a massive amount to experience.

Have you recently started playing? Or are you a Neverwinter veteran? Share your thoughts on the game and any tips you think might be useful! Tell me all your secrets! Or just tell me the race/class you rolled and what you think of it. That’s cool, too.