Yet entirely like all the others, so a good start? Bad start? I’ll tell you something, as I was about to question it being a bad start my laptop binged and complained it needed charging. So, bad start I guess.

I’ve been wanting to write for a while, but I lost a lot of that oompf that gets me to write – imagination mostly. Motivation? I’m working on it though. It’s weird, and I’m sure something many of you (everyone?) can understand, at least the chatter of it. But, my point was, it’s weird how losing my imagination left me feeling lonely. We’re all writers here, or readers, or I don’t know, tapestry weavers (now I’m just writing things because they rhyme) and I think we can all appreciate how characters – or creativity – can fill an otherwise lonely void.

Well, my brain has been filled with a hot mess of other chatter for too long and it shut up the good stuff. I’ve been quiet because that bad stuff has been out of control. I’m trying to regain control again. I’m not setting myself any rules in writing though. None of that write X number of words a day stuff. I’m setting myself rules in caring for myself. It’s weird, thinking that caring for ourselves can be so hard. I think because for a lot of us we don’t place the same worth on ourselves as we do others.

So, my quest (too much want to play an old MMO – am now speaking of quests…) will be to eat at least one good meal a day (I’ve never had a healthy relationship with food) and to drink much, much more water than I do. Weird that these are tasks to get myself in a better state for writing, but writing stories is hard when you’re brains a kaboogle.

Anyway, there’s more, like exercise etc. But, we’ve been here soooo many times before – that’s the thing about mental illness, it’s a damn fine rollercoaster – only not damn fine, more like rusty and kind of worn, squealing and groaning when the tracks start up again. I guess the water will be the oil to try and make the noise a little more bearable and the food will be… will be… I don’t have a fucking clue.

I’ll tell you one thing, after telling you all of those above things, part of the reason I’m writing this post is just to prove myself wrong. So, I’m sorry you’re reading this. But I was set on the fact I wouldn’t write again, partly because I just didn’t want to. The thought of writing made me nauseous, but what can I say? It’s a bad relationship. Always go back, even when I shouldn’t or I’m not ready to, only to make a fool of myself again.

There’s more interesting stuff going on that I want to write about, so I guess this is me kicking down the door (haha, more like timidly knocking – haaaallllloooooo) to get the ball rolling.

You see, we moved to a new state, well actually I’m in the process of moving to a new country. I can’t really say I have yet because they have to let me first. SO, more interesting things and less self-indulgent things I hope to be writing about like going through the immigration process – maybe. And decorating a house that for some reason is painted all yellowish beige throughout. I guess it’s a popular colour? I’m not one to criticize an old owner’s choices, it’s just not quite for us. I think I’d like to post what we’ve been up to. Diary and all that.

As usual I started out a blog post talking about health after a long time of no blog posts, but I’m not well and my life is very small as of right now, soooo, that’s that. But, I want to be well. I’m sick of regrets. I don’t like regrets. I get anxiety over having regrets I might one day have and over regrets I already do have. I’m trying to lessen the possibility of future regrets. I will regret this post should I write the word regret one more time. 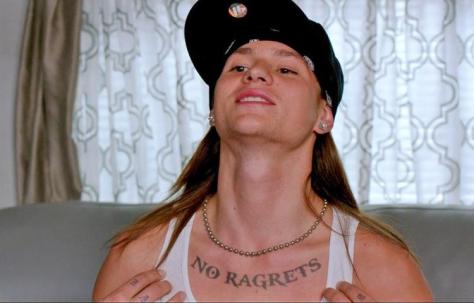 We also have a garden to do something about. I say do something about because I was so excited to have a garden with grass that we can work on together (in Hawaii it was mostly paving), only I didn’t factor in that grass grows A LOT in this kind of weather. All the time. Why keep growing? Why don’t you like the hair cut we gave you? I’m also not used to having a big garden. I’m sure in mainland America terms it’s average or even small, but in English, or even where we were in Hawaii, there’s a fair bit of it! I don’t even know where to start with making it pretty and there’s this tree that keeps throwing pine needles at me. I don’t really have a green thumb, but that same tree did give my husband a red one when one of its pine cones made him bleed! What is this evil tree witchcraft?!

So yes, I’ll try and take photos and upload progress pictures because we have some plans for the house, including making it cat friendly. As you know we have a lot of cats, and although they get along well, they really like their vertical space and a bit of privacy now and then, and so we want to give them more of it.

I hope you are all well. 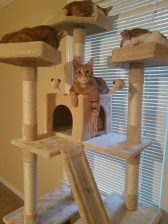