Gosh it is warm today. I’m sitting beneath the fan in the bedroom, half the curtains pulled shut and half open (Fen likes to sunbathe) and drinking water like it’s going out of fashion – lame example, I know, but my brain is in melt mode so please excuse me, mister.

I just got done watching the finale of season one of the show YOU. Has anyone watched this? Damn, it was good. It started out with an episode that got my brain ticking a little bit, and then as it continued I (at times) felt like I was watching Pretty Little Liars from the viewpoint of A. Given that A was my favourite character (until the end), this was pretty awesome! 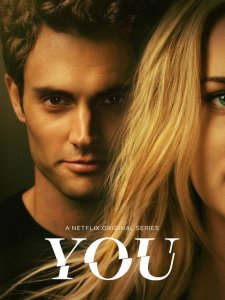 The other times, I felt like I was looking into the mind of a psychopath – if I can pretend to even fathom what that would look like. It was interesting seeing the characters try to reason their choices, whether good or bad. The obsessive nature of Joe was frightening and I wonder if he ever truly believed he was protecting his girlfriend or if all of it was about his own desperation for control.

Anyway, after the finale, I honestly can’t wait for season two. Speaking of, just let me hop on over to google for a second… Aargh, no, I can’t find any details about a season two of Good Girls. I’m hoping there will be and that my heart isn’t trampled on (trampled on, I tell ye!) again like after The Mist was cancelled. Bah humbug. You is coming back though! Wahey! Aaaah my roller coaster of Netflix emotions.

If you have seen YOU and want some (spoiler-ish) memes to chortle at, I got you: https://www.popbuzz.com/tv-film/news/you-netflix-memes/

I’m back to continue writing this during the evening. It is now certainly cooler and, I would argue, the weather is nicer. The sun began to set with an amber glow that enticed me outside like the little confused moth that I am only to find that the sky was dark and it was raining. It came as a positive surprise and I called my fiancé out to join me sitting on the step.

I love the smell of rain. I find it instantly relaxing and if I could tell you why then I would, but I can’t. It will forever remain a mystery! Hear that, scientists, this one remains a mystery!

I intended to write yesterday, when I had a little more to write about. Actually, I think I started writing a couple of posts a few days ago but then I got distracted by Spotify and ended up having a dance party on my own instead because I’m cool.

I did discover the answer to world peace though. All those nasty and violent people – the key to disabling them? Play this:

No one, and I mean no one, can resist No Diggity. That angry glare? Soon it’ll be chill. That storming walk? You strutting now, baby! Tell ya, people should be armed with boomboxes playing No Diggity – or, orrrr Fresh Prince. Damnit, now I’m going down the Spotify rabbit hole again!

Back to yesterday. One of the reasons I came out here was to attend some of my fiancé’s appointments with him. Yesterday I went to the first one. Honestly, I’m not sure if I was just really anxious with being around a lot of people, or from the appointment itself (even though the doctor was extremely positive), but I absolutely knocked out when we got home. I’ve been up and down with my sleeping so it makes sense I was tired but by garfunkle… I was fast out and then slept through the night as well. I actually don’t remember much at all from the appointment. Maybe I was under some kind of Matrix mind tricks.

Do you ever wonder if someone is pulling the strings? I don’t necessarily mean a god here, maybe just some bored guy in an office named Brian. Sometimes, a bunch of things happen that seem too close to be a coincidence, or lots of déjà vu – I’ve been having a lot of that lately. I’m beginning to wonder about the law of attraction though. Although, I’m not sure I fully understand it right now because I’m eating a cookie – scientifically proven to chocolate chip the brain. I just know that I was incredibly pessimistic up until a couple of months ago (depression was being a bitch, so sue me! – or don’t, please don’t universe) and in these past couple of months a lot of unruly wickedness has happened!

Or is law of attraction if you want it you’ll eventually get it? As a wise man once said, if you build it they will come. Ah, I think I lost my train of thought. If I even had one to begin with. You see, it’s night time now. My fiancé has just dozed off to sleep and in his ambien addled state requested that I be sure to tell you that he saw a man eating a yam in his car. He has never asked that I mention anything to do with him before, so I’m wondering if (back to our Matrix theme) this man eating a yam is perhaps another version of the lady in the red dress?

I think I’ll post some pictures along with this post. Liven it up a little bit. I’ve been meaning to write fiction again but I’ve also been meaning to avoid writing fiction and it looks like at the moment the latter is winning out.

Here’s to hoping you’re all doing well and that if the Matrix has you then you’re learning some awesome karate moves while listening to No Diggity.

Or, what if I’m the white rabbit?

What if I’m trying to lead you to a questionable bar at ungodly hours in the morning?

What if the code word is in the song…

…what if wordpress is the rabbit hole…